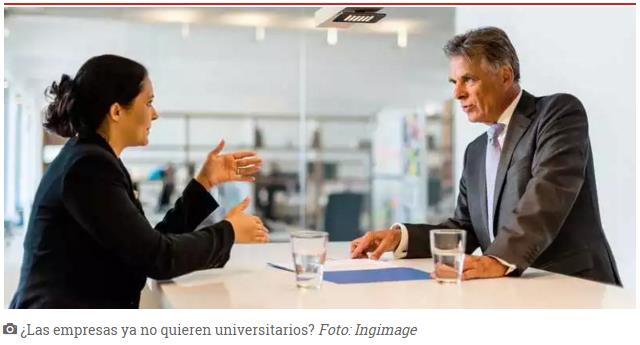 The head of Human Resources at Google, Laszlo Bock, was the last to point out the gap between the training received by university students and the needs of the labor market.

The world is changing by leaps and bounds. What used to be useful and today is questionable, tomorrow may be a product of the past.

That volatility that characterizes these times is also transferred to the labor market. With the impulse of new technologies, there are professions that are becoming obsolete. In return, there are others that are emerging. A reality that has put in check the universities around the world that must rethink what type of professionals are training in their classrooms in accordance with the new demands of the world.

In this vein, one of the biggest defenders that the university degree is no longer as significant as it once was is Laszlo Bock, head of the Human Resources department of the giant Google. In an interview for The New York Times, Bock assured that “the university’s grade point average is useless as a hiring criterion, as are the scores that people have obtained in the different tests they have had to solve. We discovered that these things do not allow us to predict anything regarding the good performance of a future worker may have at work ”.

In recent years, the most famous metasearch engine in the world has other priorities when it comes to selecting personnel, such as the level of experience of the future hired. In fact, and as the executive himself confirmed in the aforementioned interview, Google is hiring more and more workers without a university degree. “We have teams in which 14% of the people who make it up do not have any type of degree related to a university.”

For Bock, there is currently an insurmountable gap between the training received by young university students and the demands of the work they will have to do. “A person’s skills at work have nothing to do with those required in college,” she said.

So, according to what he told the US publication, this is what Google looks to recruit its staff.

First of all, the future employee must have the ability to learn and do it faster than their competitors. This premise makes sense insofar as companies must be in continuous transformation to adapt to the dizzying pace of change that prevails in the business sector. The generation of ideas is especially relevant at this point. Also the ability to innovate and go one step further in solving problems.

Leadership is another key faculty of a worker, regardless of the hierarchical level they occupy in the company. For this, it is essential that the person is able to form a team and work hand in hand with him. Guide and influence their decisions and respect those of others: discern when to take the reins and when to step aside so that the leadership can be taken by someone else.

Bock was emphatic in pointing out that humility is another priority characteristic of a good worker, and one who wants to be part of the Google staff. For the manager, “passion and drive must be balanced through humility,” which implies being willing to accept that someone may have a better initiative than your own or that they have more knowledge in a particular area.

Other qualities that Bock mentioned in the interview in reference to what Google looks for in its future employees were the ability to take responsibility, conflict resolution and commitment to the company.

Thus, and referring to the Google executive, it is time for universities to rethink what type of professionals they are training in their classrooms because for companies it is no longer enough to have a recent graduate who knows theory, but not job reality . The debate is still open.

THE SOCIAL VALUE OF SELFISHNESS

SEP: School at the Center