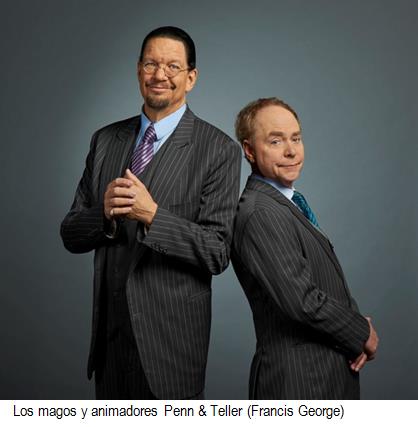 Education, in its most attractive form, is performance art. From the moment a teacher walks into the classroom, students look to him or her to set the tone and course of study for everyone from the most enthusiastic to the most apathetic students. Even teachers who have moved away from the traditional classroom format, towards more learner supportive autonomist approaches such as project-based and peer-to-peer learning, still need to engage students in the process, and serve as a vital conduit between student and subject.

Teachers are rarely trained in the performance aspect of teaching, however, and since every classroom in America contains at least one bored, reluctant, or frustrated student, engagement through performance may be the most important skill. in a trick master’s bag.

I asked Teller, a former Latin teacher and the silent milieu of the wizarding association known as  Penn &  Teller, about his years as an educator, and the role he played in his teaching. Teller taught America High School for six years before he left to pursue a career in magic with Penn, and in the 40 years since, the duo have won Emmy, Obies, and Writer’s Guild Awards, as well as a star on the Hollywood Walk of Fame. As our conversation snaked through Catullus, Virgil, Shakespeare, and the theory of education, he explained why he believes that achievement is an essential elementary aspect of effective teaching.

The first job of a teacher is to make the student fall in love with the subject. That doesn’t have to be done by waving your arms and prancing around the classroom; There are all kinds of ways to go about it, but no matter what, you are a symbol of the subject in the minds of students.

Like that symbol, Teller argued, the teacher has a duty to participate, to create the romance that can transform apathy into interests, and, if a teacher does his job well, a kind of transfer of enthusiasm from teacher to student. performed. The best teachers, Teller argued, find a way to teach content while keeping students interested. “If you don’t have as much wonder and content, you either have a technical exercise or have a lecture.” Teller’s educational philosophy has its roots in philosopher AN Whitehead  ‘s  “rhythm of education,” a theory that claims learning occurs in three stages: romance, precision, and generalizability.

Romance, Teller argued, precedes everything else. “I’m 5’8” and I was about 160 pounds those days, so I wasn’t the type of person that could walk into a rowdy children’s room and [that] would just pay attention to me. What I have, however, is delight. I get excited about things. That is the root of what you want from a teacher; a delight in what the subject is, in the operation. That is what affects students ”.

In pursuit of that romance, Teller’s first order of business in his classroom at Lawrence High School in Lawrenceville, NJ, was to toss out the curriculum and text and create his own. “I taught [Latin] with a set of Latino readers I composed myself, complete with illustrations, I called Lingua Latina Pictorius.”

I did my best to hide my joy, calm to reply that I would really like to see a few pages, if I still had them. This was, of course, an understatement; I was dying to see the books. Teller would have no promise, since the books were stored somewhere, but a few hours later, digitized excerpts from her readers appeared in my inbox.

He paired his handmade books with supplemental readings, also selected for their potential to engage his students. He chose  Book Two of The  Aeneid, because it contained the story of the Trojan horse, and selections from the poetry of Catullus. “It is not the absolutely pornographic thing like, pedicabo et irrumabo, which is the same, very naughty poem, but the material that I liked and could get emotional. Everything had neither humor or sex or blood or romance in it, because that’s what you’re thinking when you’re in middle and high school.

Some subjects cannot be taught without show business, Teller asserted. Teaching  Shakespeare  as a text, before students have seen a production, is the surest route to ending any enthusiasm for The Bard. Students should see Shakespeare before they read it, he said. “Until you’ve seen what the idea [of Shakespeare’s play] is, it’s really like giving a child an orchestral score and saying, ‘Imagine this music.” Well, you can’t; you have to be Mozart to do that. “

What if Shakespeare (or Catullus or Vergil) makes the students uncomfortable? That’s a good thing, Teller said. Learning, like magic, should make people uncomfortable, because neither are passive acts. Expanding on the analogy, he continued, “Magic doesn’t wash over you like a gentle, reassuring lullaby. In magic, what you see conflicts with what you know, and that discomfort creates a kind of energy and a spark that is very exciting. That level of involvement that magic brings to you by making you uncomfortable is a very good thing. “

As we were on the topic of discomfort I asked Teller what he thinks of efforts to protect students from discomfort as they learn through censorship of school teachers content and requirements for activation warnings. For the first time in our conversation, Teller illustrated the power of her trademark silence, and the line went silent.

Just when I had started to think we had been disconnected, he replied:

When I go out at night and look at the stars, the feeling I have is not comfort. The feeling I have is a kind of delicious discomfort in knowing that there are so many things out there that I do not understand and the joy in recognizing that there is a huge mystery, that it is not a comfortable thing. This, I believe, is the main gift of education.

SEP: School at the Center

Benefit of Remote IT Support Services

How to Improve Children’s Reading Comprehension. Tips for Understanding What You Read